There is a Lexicon of Wisdom

Viral marketing is a lot like crowdsourcing, although the company’s marketers are actually in charge of the content. It you missed my post on crowdsourcing, you can catch up here!

Viral marketing works by spreading (hopefully like wildfire), via the internet. I am going to provide two examples of viral marketing. Burger King’sWhopper Sacrifice and The Best Job in the World.

In 2009, Burger King released a Facebook application called Whopper Sacrifice. Users add the app and then delete 10 of their friends to receive a free Whopper coupon. Here is the catch, the sacrifices appear in your news feed. So say I decide to delete John from my friends list, the news feed will rat me out with, “Sarah Smith sacrificed John Jones for a free Whopper.” News of this application spread very quickly, because lets face it we all have a few spare Facebook friends that we don’t really care about anyway. 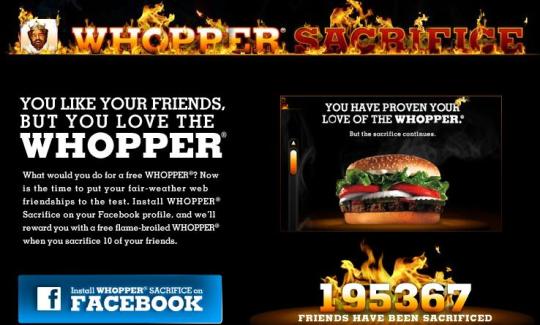 The second example is Australia’s viral marketing for “The Best Job in the World”. The job is the caretaker of an island in the Great Barrier Reef. It paid $100,000 for a six month contract. The job posting was announced using traditional media, but then followed up with a huge viral marketing push.

The campaign goals were very lofty. They only wanted to receive about 400,000 hits on their website. They not only received many more hits, they also received 34,000 applications. The campaign generated over $70 million worth of publicity.

After a winner was chosen for the world’s best job, they are required to post video blogs to help promote the islands.